The U.S. president suggested that the meeting could have a positive impact on relations between the two countries, the hemisphere and the world.

In his remarks, Obama said that there will obviously still be deep and significant differences between U.S. and Cuban governments, but he appreciated Raul Castro’s spirit of respect and civility and he hopes that over time they will turn the page to open new possibilities.

Obama explained his hope that there will be more direct connection between peoples but that he will continue to raise concerns about democracy and human rights.

He thanked Castro for the spirit of openness and courtesy that he has shown during their interactions and hopes to build on the mutual respect and confidence for a positive impact on relations between the two countries, the hemisphere and the world. Castro said that Cuba will raise concerns about the U.S. as well.

“As we have concluded, we can be in agreement to disagree and turn the page in our relations,” Obama stated.

On practical matters, Obama said that he hopes Cuba can open an embassy in DC so that U.S. and Cuban diplomats can operate on a more frequent basis and that “some of our most immediate tasks include normalizing relations and opening up an embassy in Havana.”

“This shift in U.S. policy represents a turning point for our entire region,” stated Obama. “The fact that President Castro and I are both sitting here today marks a historic occasion,” he added.

“I can say with all sincerety that the essence of my policy is that the people of Cuba can live in freedom and security where their talents and ingenuity can thrive,” Obama said.

Castro warned however that a lot of patience will be required in the future, although both heads of state formally agreed on the opening of embassies in their respective countries in the near future.

”We are willing to discuss everything, but we need to be patient, very patient,” Castro said. “We might disagree on something today on which we could agree tomorrow.”

After a long historical digression on the imperialist moves of the United States against the island, including its support for dictator Batista, the Bay of Pigs invasion and the opening of the prison at Guantánamo Bay, the Cuban leader declared that Obama was not responsible for the embargo, insisting as well as Obama that the future relationship had to be grounded on respect.

“I apologized to Obama for expressing myself so emotionally. I am very emotional when I talk about the revolution. President Obama has no responsibility for this. There were 10 presidents before him, all have some debt to us but not President Obama… In my opinion, President Obama is an honest man. I have read his books and I admire him and his life. I think a lot of his behavior has to do with his humble background.”

As for Obama, he said he did not want to be “imprisoned” by history or ideology but would rather look towards the possibilities opened by the future.

OUR DUTY IS TO STRUGGLE

Embassy of Cuba in Canada

Take a Trip to Cuba

When Latin America Awakened in a Hug 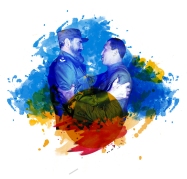